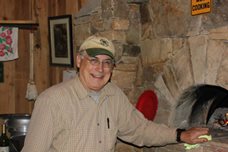 Pete at his pizza oven

Pete Jaeger was one of a kind, and he will be missed in the Morgan world! His broad smile and ready wit were highly infectious.  He was active locally and nationally for many years, in New Jersey and North Carolina.  He moved from NJ to Chapel Hill, NC in the mid  70’s with his wife, Gael, their two daughters, two ponies and two Morgan mares.   For many years Flintlock Farm was a family operation and the barn was shared by the equine enthusiastic neighborhood.

After several years, the Jaegers moved to a farm where they could expand to a training and breeding facility.  Flintlock Farm owned, trained and bred champion Morgans for over 30 years.  During those years, Pete served as president of the Virginia Carolinas Morgan Club, Board of Directors of the AMHA, President of the NC Horse Council as well as serving on the board of the VC Club.  He was always an avid spokesman for the breed. Many promotional Open Barn Days were held at the farm to introduce people to our wonderful Morgans.

Pete was always a proud family man.  Daughters Jamie and Christie were also active in the Morgan world – Jamie served as president of the AMHAY and Christie served as secretary.  In the years of Little Bit Morgan Camp (the VC Youth Club summer weekend camp), Pete was the camp cook, and many of us remember his fabulous breakfasts!

As his daughters grew, they became active soccer team members and Pete was the ultimate ‘soccer dad’.  He attended games and served as host for many a team party.  When the daughters married, his pride grew.  Jamie and Michael bought Carmen Miranda, and Jamie campaigned her to National Championships.  Christie became a jeweler, making beautiful pieces which she sold from her company, SilverWear.  Pete had three grandchildren- Dylan, Garrett and Keaton who live in Pinehurst.

He fought cancer bravely for several years, and through it all maintained his sense of humor and good spirits.

In addition to his horse activities, Pete was an active alumni of Colgate University, a Veteran and American Legion member,  and a frequent High Sales Regional Representative for Becton Dickinson.

The 2018 Southern States Regional Morgan Horse Show will be held in Pete’s  memory.