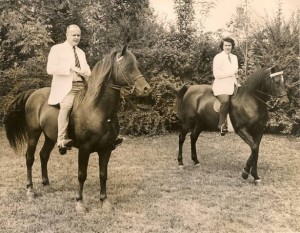 James was an active member of the Virginia Carolinas Morgan Horse Club and supported his wife’s love of Morgan Horses. With Barbara, he co-hosted the first meeting of the club at their home, October Farm, in Raleigh. He later served as club president and was the announcer at the first Southern States Morgan Horse Show. After Barbara’s death, James continued October Farm Horse Books for many years.

Jim was born in Oberlin, Ohio. He graduated from Western Reserve Academy in 1944 and trained as a radar repair technician in the US Navy in 1945.

He graduated from Oberlin College with an AB in Psychology in 1948 and married Barbara Beaumont the summer following their graduation.

He received his MA in Psychology from Princeton University. He completed his PhD in Psychology at Duke University in 1963. His first teaching position was at Harvard University where he was the assistant of B. F. Skinner. After two years teaching at George Washington University, he accepted a position at NC State University as an associate professor of psychology with research study in the fields of behavior and learning. He remained there until his retirement

While at NCSU he was involved in a wide range of research including pilot error for the US Navy and creating computer-based curricula for the blind.

As a lover of music, he sang with the Raleigh Oratorio Society, the Cary Concert Singers, and was a life-long lover of symphony orchestras, maintaining front-row season tickets for the North Carolina Symphony for much of his life. James also loved playing the piano and enjoyed composing for piano and for chorus.

He is survived by his sons, Thomas B. Cole and wife Mary of Cary, NC; Matthew B. Cole and his husband Charlie Dupree of Bloomington, Indiana; and granddaughters Chelsea and Sarah Cole of Cary, NC.

Barbara was instrumental in helping to create what is now an extremely active Morgan community and horse show scene in North Carolina. The first meeting of the Virginia Carolinas Morgan Club (VCMHC) was held in November 1966 in Barbara Cole’s living room. Thirty-seven Morgan enthusiasts attended.

In the years that followed, Barbara worked tirelessly to promote the Morgan horse, AMHA and the VCMHC. She served as an officer and a board member and newsletter editor of the VCMHC. She chaired the popular Field Day held in 1969, which drew about 300 horselovers

Please send any news items, photos or event information to our Newsletter Editor